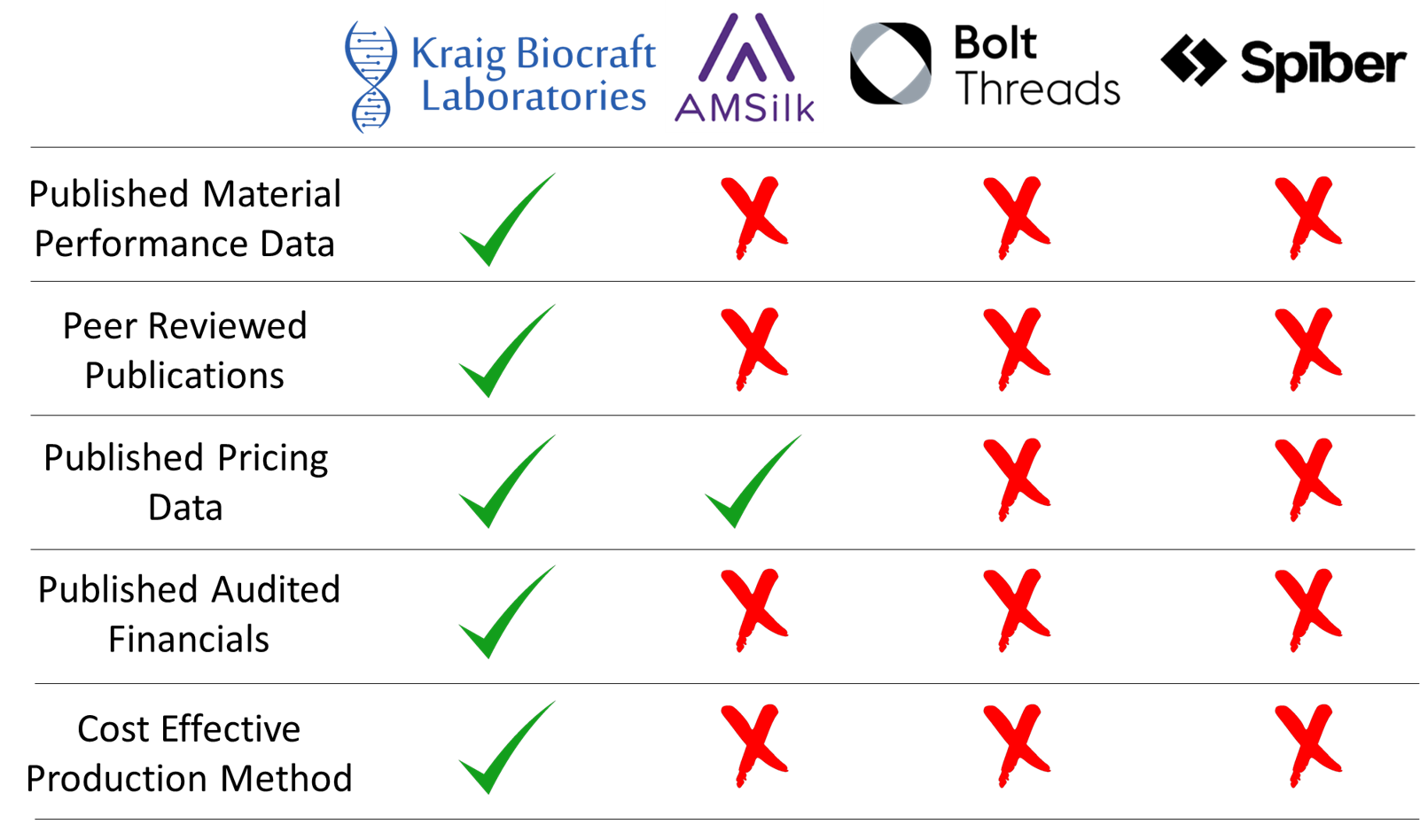 As demonstrated by the table above, we believe that Kraig Labs has an overwhelming competitive advantage and is the world leader in spider silk technologies.

In our opinion, and as demonstrated by the graph above, the fermentation process is prohibitively expensive. There are very few applications for spider silk which can support a $37,000 per kilogram price.  Based on the publicly available data, it is our opinion that Kraig Labs has a huge cost advantage.

When Kraig Labs first launched its research and development efforts to produce spider silk, very few people believed that those efforts could be successful.  Many even doubted that there would be a market for the product once it was developed. As Kraig Labs has proven the feasibility of producing spider silk, the industry is beginning to see the tremendous market potential for the product and competitors have started to enter our field. That is a natural development in a field like technical textiles where billions of dollars are at stake.

We accept the entry of these competitors as verification of our own analysis of the market.  As the world leader in this technology, we do feel that others have stood by while we cleared the land, plowed the field and did the heavy lifting. Nevertheless, when we look at these competitors we are reminded that imitation is the height of flattery.

As we look at the large investments made by venture capitalists over the last 24 months into the development of rival spider silk technologies we cannot help but smile. They have finally discovered what we have known for some time; recombinant spider silk has the potential to make significant inroads into the multibillion-dollar textile and technical textile industries, opening up new avenues of human innovation. As a case in point, Kraig recently signed a material development and delivery contract with the U.S. Department of Defense.

We at Kraig Labs have always believed we have had a superior technology and product.  After a little extra research on where we stand in this new, but growing, industry, we have come away feeling even more confident than before. 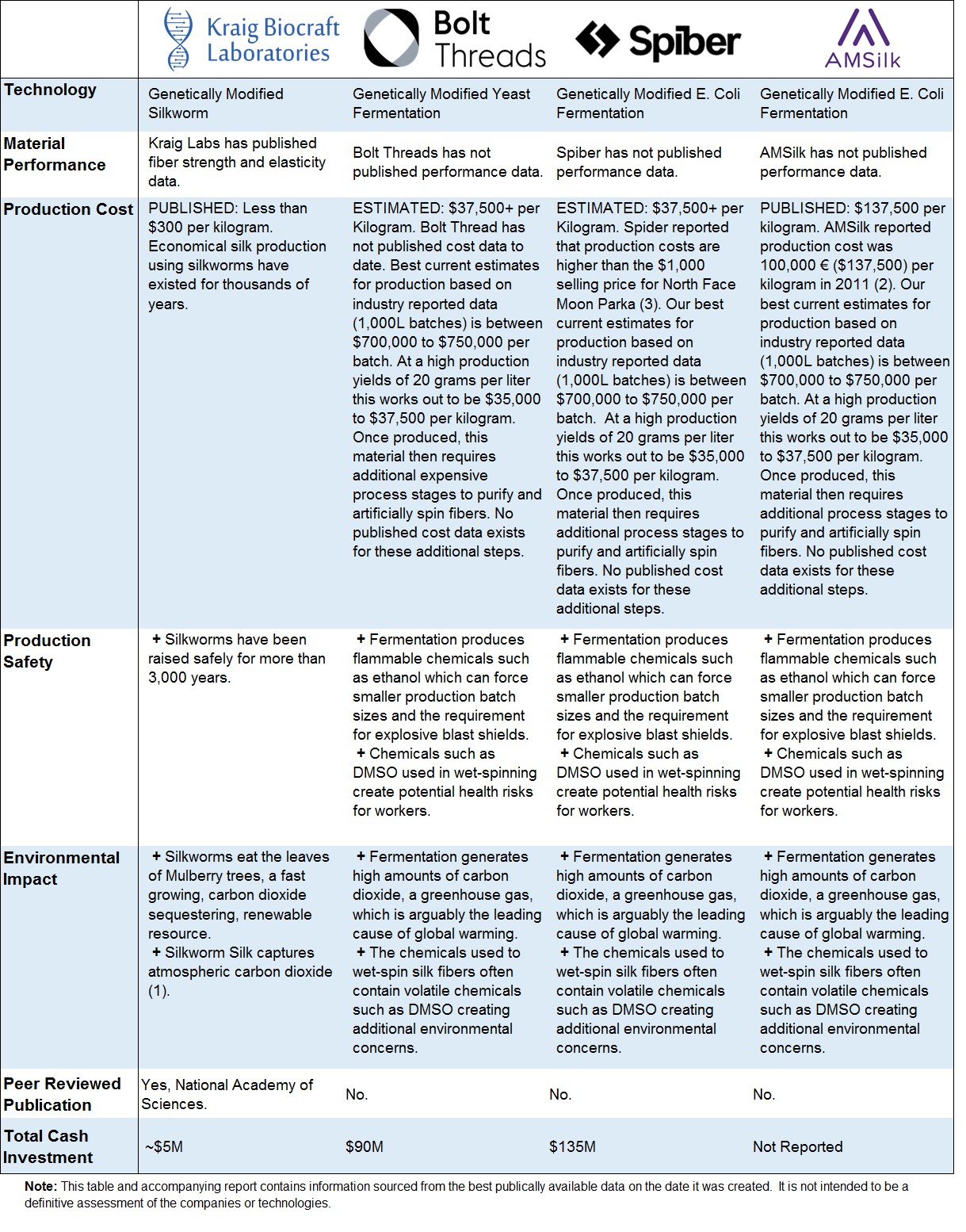 Our competitors have yet to publish strength and elasticity data for their products in development.

Kraig Labs is committed to sharing measureable results with our shareholders and the public.

Why silkworms?  Because silkworms have a proven industrial scale production record, producing approximately $5 billion worth of normal raw silk per year. Our technology simply harnesses that production capacity by introducing a genetically engineered silkworm that produces recombinant spider silk instead of mundane silk.  The result is a scalable and incredibly cost effective process.

Our potential competitors, who have attracted some press and the interest of venture capital over the last year, are using a very different technology.  They are genetically engineering yeast and bacteria to excrete protein into the soup that they live in. While it may sound simple, fermentation of recombinant proteins is neither simple, nor in our opinion, cost effective.

In this fermentation process microorganisms are grown in bulk, in a growth medium, with the goal of producing a specific chemical product. However, unlike beer fermentation, recombinant protein synthesis requires a number of additional production steps and potentially hazardous chemicals. These requirements increase costs and raise safety implications. For instance, fermentation produces high quantities of combustible chemicals, like ethanol, which limits batch size and requires expensive safety measures, in order to reduce the likelihood of explosions or fires.

Perhaps the reason our competition is uncomfortable releasing cost data is because fermentation production costs are so high. Best current estimates from the protein production industry indicate that a 1,000 liter batch of GMO yeast or bacteria used to excrete recombinant protein could cost anywhere from $700,000 to $1,000,000 to produce and manage. At a high protein yield of 20 grams of usable silk protein per liter of solution, this could cost anywhere from $35,000 to $50,000 per kilogram of silk protein.[1] These costs do not even include the cost of other items and processes, like silk protein purification and wet-spinning the protein globs. These additional steps are all required further down the production process before you ever get to usable silk fibers.

Following fermentation, the next critical steps in the creation of silk from that process are extracting the protein from solution and drawing them into synthetic silk fibers. The recombinant proteins must go through a purification process, and then must be “wet-spun” to produce usable fibers. Wet-spinning is a process which often requires the use of controlled chemicals like dimethyl sulfoxide, or DMSO, which must be handled with extreme care. These steps not only add time, but significant upfront cost to the process as well.

Unlike our competitors, Kraig Labs chose to work with nature’s own silk production factory, the silkworm.  While others believed it could not be done, we overcame the technical obstacles and created several lines of genetically modified silkworms which spin recombinant spider silks.  It took years of work in the laboratory, but now we have a practical and elegant production platform which is inherently cost effective.

Instead of using a complex fermentation, purification and wet-spinning system, we let nature do the work for us. Our genetically engineered silkworms are raised using the tried and true methods used by silk farmers for millennia.  Our production process is as simple as growing and feeding white mulberry leaves to our proprietary silkworms and harvesting recombinant spider silk directly from the cocoons. Using this economical technique, our recombinant silk production can decisively beat the $300 per kilogram[2] threshold, compared to the reported $35,000 to $50,000 per kilogram cost for the fermentation approach.[3]

While being environmentally conscious is the objective of all producers in this industry, the fermentation process produces high levels of carbon dioxide. As we all know, CO2 is a greenhouse gas and is argued to be the leading cause of global warming. In stark contrast, Kraig Labs’ mulberry trees and the silk from silkworms have proven to be effective at sequestering carbon dioxide and are renewable resources. Mulberry trees are also very low maintenance, while still providing essential global green-cover and significantly help in reducing soil erosion in areas.

In addition to climate impacts of the fermentation approach, solvents typically used to wet-spin fibers can have significant environmental impacts. DMSO, one of these materials mentioned previously, can be absorbed directly through human skin, carrying with it potentially dangerous side effects.

The potential applications for spider silk products include the following textile markets:

The Company believes that the superior mechanical characteristics of the next generation of protein-based polymers will open up new applications for the technology, outside of traditional textiles, and result in a significant increase in demand.  These fibers can justifiably be referred to as “super fibers.”

In addition to spider silk’s potential anti-ballistic and textile qualities, spider silk’s amazing properties could make it the basis of many market disrupting technologies in industrial, military and consumer applications, requiring superior strength, toughness and flexibility.  Beyond traditional fiber properties, recent discoveries in the ongoing study of spider silk has identified a number of truly amazing properties, including the ability of spider silk to function as a fiber optic chemical sensor.[4]

Smart venture capital money continues to pour into spider silk technology with an additional $106 million being invested in 2017.

Let’s apply this simple rule of expected returns to one of Kraig Labs’ competitors, now on their 4th round of capital raising and approaching $196 million in total.  $7.7 million in early-stage investment targeting a 15x return.  Then an additional $188.3 million in three later-stage investments targeting a 4x return.  If we assume this venture capital money has claimed an aggressive 80% of company equity, then they are valuing this single player in the spider silk market at more than $1 billion dollars.

With so much smart money looking to claim a piece of the exciting market for spider silk, what potential does the future hold for Kraig Labs and our easy to produce, low cost, best in class spider silk super fibers? You do the math.

Kraig Labs is delighted that we overcame technical and scientific obstacles with brainpower and ingenuity, and not by throwing money at the problem.  The result is our unparalleled technical prowess and process advantages. Unlike our competitors, who jointly invested more than $300 million, Kraig Labs used minimal cash (roughly $5 million) and a considerable amount of sweat equity.

We are proud of the achievements that have made us, arguably, the world leader in spider silk technologies.  As world leader in recombinant textiles, we believe we are poised for success in the technical textiles market place.

[2] Our production cost advantage appears to be of an order of magnitude when compared to “fermentation” based technologies.

[3] In 2011, one of our competitors referenced their production costs as in excess of $100,000 per kilogram.  Since then we can find no updated production cost figures by that competitor.  Cost estimates for competitors described here are based on our research of industry standards for protein production.