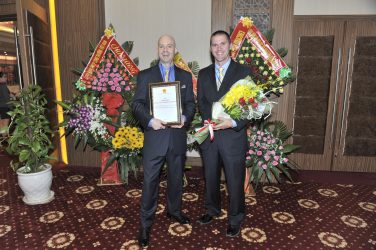 The Investment Certificate was issued to the Company during the March 26, 2017 Quang Nam Investment Conference, which was attended by Vietnam’s Prime Minister and numerous high level central government officials, including the ministers of all relevant governmental departments, as well as high level officials from Quang Nam province, including the Chairman and key provincial officials. Representing Kraig Labs at the meeting were the Company’s CEO and Founder, Kim Thompson, and COO, Jon Rice. 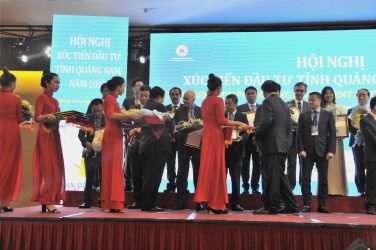 “It was an honor to receive this award on stage from the Chairman in front of the Prime Minister,” said Thompson. “This is a huge step forward in our plans to expand production on a large scale. We look forward to the opportunity to revitalize silk production, using high technology, in an area of the world with a strong history of quality silks and textiles.”
This Investment Certificate award was the necessary and final step before the Company seeks central government approval for the expansion of Kraig Labs’ business. The Company’s efforts to secure that final approval are well underway. 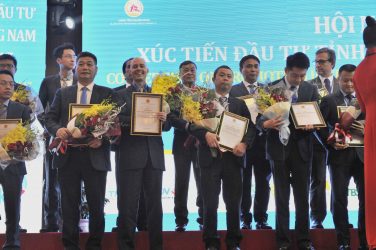 “I would like to personally thank the Chairman and his staff for working so closely with us to finalize the Investment Certificate,” stated Rice. “While this is a momentous occasion for Kraig Biocraft Laboratories and our shareholders, it is also a turning point in the commercialization of advanced fibers.”

To view the most recent edition of Kraig’s Spider Sense quarterly newsletter and/or to sign up for Company alerts, please go to www.KraigLabs.com/newsletter.

About Kraig Biocraft Laboratories, Inc.
Kraig Biocraft Laboratories, Inc. (www.KraigLabs.com), a fully reporting biotechnology company is the leading developer of genetically engineered spider silk based fiber technologies. The Company has achieved a series of scientific breakthroughs in the area of spider silk technology with implications for the global textile industry.

Cautionary Statement Regarding Forward Looking Information
Statements in this press release about the Company’s future and expectations other than historical facts are “forward-looking statements.” These statements are made on the basis of management’s current views and assumptions. As a result, there can be no assurance that management’s expectations will necessarily come to pass. These forward-looking statements generally can be identified by phrases such as “believes,” “plans,” “expects,” “anticipates,” “foresees,” “estimated,” “hopes,” “if,” “develops,” “researching,” “research,” “pilot,” “potential,” “could” or other words or phrases of similar import. Forward looking statements include descriptions of the Company’s business strategy, outlook, objectives, plans, intentions and goals. All such forward-looking statements are subject to certain risks and uncertainties that could cause actual results to differ materially from those in forward-looking statements. This press release does not constitute an offer to sell or the solicitation of an offer to buy any security.
Ben Hansel, Hansel Capital, LLC
(720) 288-8495
ir@KraigLabs.com