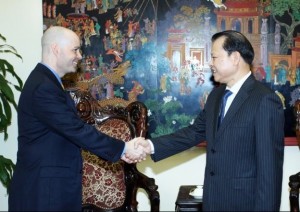 LANSING, MI-(Feb 6, 2014) – Kraig Biocraft Laboratories, Inc. (OTCQB: KBLB) (“Company”), the leading developer of advanced spider silk based fibers, announced today some of the Company’s findings from a very successful mission to assess the potential to establish commercial production of the Company’s high technology silk fibers in Vietnam. Kim K. Thompson, the Company CEO and Founder, conducted meetings with high ranking Vietnamese officials, including, most notably, Deputy Prime Minister Vu Van Ninh, which was featured on Vietnam Television (VTV) National News and can be viewed at the following link: http://www.youtube.com/watch?v=fvZUqd5veZY.

“The main purpose of the trip was to investigate and discuss the possibility of establishing commercial scale production of Monster Silk™ in Vietnam,” said Thompson. “We inspected silk production locations and infrastructure, potential vendor supply chains and sourcing operations, as well as the scope and depth of the country’s sericulture industry. The trip confirmed that Vietnam has the qualities and infrastructure needed to sustain large scale production of advanced silk fibers. We believe that our technology has the potential to revitalize the silk industry.”

After meeting with DPM Ninh, Thompson’s delegation was accompanied by Vietnamese diplomats on a working visit to Lam Dong province. In Lam Dong, Thompson met with high ranking officials of the provincial government to discuss potential commercial production.

“Our discussions were very detailed and ranged from technology, land use and building occupation, to employment considerations and import/export duties. I’m very encouraged by what we have seen and by the openness and forward thinking of our Vietnamese hosts. I believe that the Vietnamese see the tremendous potential for growth and mutual benefit. Excellent progress was made on every key issue. We are now conducting a deeper evaluation of the data, and look forward to the real possibility of launching commercial scale production of high technology fibers in South East Asia,” Thompson concluded.

Kraig Biocraft Laboratories, Inc. (www.KraigLabs.com), a fully reporting biotechnology company is the leading developer of genetically engineered spider silk based fiber technologies. The Company has achieved a series of scientific breakthroughs in the area of spider silk technology with implications for the global textile industry.

This press release does not constitute an offer to sell or the solicitation of an offer to buy any security.