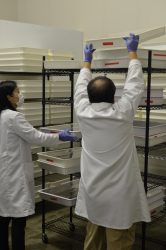 R, Mich., -October 3, 2016- Kraig Biocraft Laboratories, Inc. (OTCQB: KBLB)
(“Company”), the leading developer of spider silk based fibers, today announced that the Company has successfully launched production at its new Indiana production facility with the hatching of more than 40,000 silkworms.  With this beginning, the Company is on schedule to produce all of the recombinant spider silk necessary to fulfill its contract with the US Government on time and on budget.  The Company has a large inventory of silkworm eggs ready to hatch and, over the coming weeks, plans to ramp up the hatch rate.  The Company expects the need to hire and train additional staff to keep up with the expanding production volumes.

“Bringing this facility online is a major milestone for Kraig Labs and a significant step forward for spider silk manufacturing”, said COO Jon Rice. “These first 40,000 silkworms are just the beginning of our aggressive plans to scale domestic production.  With this facility, we now have the capability to rapidly respond to the numerous request we receive for our record setting Dragon SilkTM.  I would like to congratulate our team, whom have been working tirelessly to meet our production schedule and to see this goal realized.” 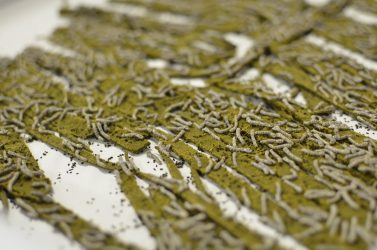 Over the coming months the Company will be increasing the throughput of this facility and preparing for an expanded U.S. operation which will include the planting of thousands of mulberry trees.

In addition to its new domestic plant, the Company continues to make progress toward the establishment of two separate international production facilities.

To view the most recent edition of Kraig’s Spider Sense quarterly newsletter and/or to sign up for Company alerts, please go to www.kraiglabs.com/newsletter.

For more information about Spider Silk, check it out at www.kraiglabs.com/spider-silk.

About Kraig Biocraft Laboratories, Inc.
Kraig Biocraft Laboratories, Inc. (www.KraigLabs.com), a fully reporting biotechnology company is the leading developer of genetically engineered spider silk based fiber technologies. The Company has achieved a series of scientific breakthroughs in the area of spider silk technology with implications for the global textile industry.