ANN ARBOR, Mich., – April 3, 2018- Kraig Biocraft Laboratories, Inc. (OTCQB: KBLB) (“Company”), the leading developer of spider silk based fibers, today announced that the Company has successfully produced the first recombinant spider silk cocoons from the new line of hybrid transgenic silkworms recently created at its Michigan production and research facility.  This new hybrid line was created by combining one of the Company’s best performing recombinant spider silk lines with a commercial strain, resulting in the largest cocoons in the Company’s history.

The first generation cocoons from this hybrid cross have exceeded the Company’s expectations with some cocoons nearly twice as large as the original spider silk line cocoons.  These larger cocoons reduce operating and handling costs throughout the production process and yield longer silk threads.  Mechanical performance testing of this new hybrid spider silk line is expected to begin shortly.

“Crossing our recombinant spider silk silkworm lines with larger traditional silkworm lines is an element of both our research roadmap and commercialization plans.  The results we’ve seen from this first crossing confirm the benefits of those strategies,” said Jon Rice, COO.  “The size of these new hybrids is beyond what we expected in a first generation hybrid and we are very interested to see how performance testing results compare to the original silkworm lines.  We anticipate creating many additional hybrids, over the coming quarters, combining the performance of our spider silk lines with these larger commercial strains.  We expect these efforts will increase our production efficiency and lower our cost to produce recombinant spider silk.” 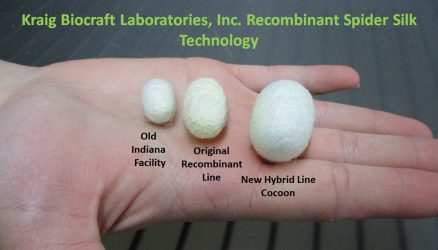